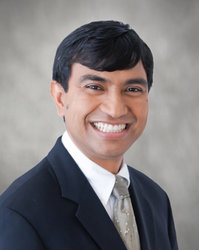 Dr. Achintya K. (Achin) Bhowmik is the chief technology officer and executive vice president of engineering at Starkey, a privately-held medical devices company with over 5,000 employees and operations in over 100 countries. In this role, he is responsible for the company’s technology strategy, global research, product development and engineering departments, and leading the drive to transform hearing aids into multifunction health and communication devices with advanced sensors and artificial intelligence technologies.

Previously, Dr. Bhowmik was vice president and general manager of the Perceptual Computing Group at Intel Corporation, where he was responsible for the R&D, operations, and businesses in the areas of 3D sensing and interactive computing, computer vision and artificial intelligence, autonomous robots and drones, and immersive virtual and merged reality devices.

Dr. Bhowmik is on the faculty of Stanford University, where he holds an adjunct professor position at the Stanford School of Medicine, advises research, and lectures in the areas of cognitive neuroscience, sensory augmentation, computational perception, and intelligent systems. He has held adjunct and guest professor positions at the University of California, Berkeley, Liquid Crystal Institute of the Kent State University, Kyung Hee University, Seoul, and the Indian Institute of Technology, Gandhinagar.
Dr. Bhowmik serves on the board of trustees for the National Captioning Institute, board of directors for OpenCV, industry advisory board for Biomedical Engineering at the University of Minnesota, and board of advisors for the Fung Institute for Engineering Leadership at the University of California, Berkeley. He is also on the board of directors and advisors for several technology startup companies.
His awards and honors include Fellow of the Institute of Electrical and Electronics Engineers (IEEE), Fellow and President-Elect of the Society for Information Display (SID), Healthcare Heroes award from the Business Journals, Industrial Distinguished Leader award from the Asia-Pacific Signal and Information Processing Association, IEEE Distinguished Industry Speaker award, TIME’s Best Inventions, Red Dot Design award, and the Artificial Intelligence Breakthrough award. He has authored over 200 publications, including two books and 39 issued patents.
Dr. Bhowmik and his work have been covered in numerous press articles, including TIME, Fortune, Wired, USA Today, US News & World Reports, Wall Street Journal, CBS News, Forbes, Bloomberg Businessweek, Scientific American, etc.