What is an XNOR Gate?

An XNOR Gate is a type of digital logic gate that receives two inputs and produces one output. Both inputs are treated with the same logic, responding equally to similar inputs. Sometimes referred to as an "Equivalence Gate," the gate's output requires both inputs to be the same to produce a high output.

How does an XNOR Gate work? 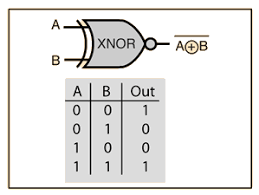 Applications of an XNOR Gate

Logic gates such as XNOR can be used in cutting edge microprocessors, containing upwards of over 100 million gates. In other forms, logic gates are integrated into nearly every modern piece of technology. For example, a hallway that has two light switches. If both light switches are in the same position, the lights will be off. If they are in any separate positions, the lights will be on. This simple configuration is a common example of logic gates in everyday life.