What is an XAND Gate?

The XAND Gate stands for "exclusive and" referring to its architecture as a logic gate wherein a positive output is only achieved if both inputs are equal. The XAND gate works synonymously as the XNOR gate, also called the equivalence gate. The logic gate receives two inputs, and produces an output based upon the architecture of the logic gate. Logic gates are widely applicable, and commonly found in modern electronics.

How does an XAND Gate work?

Much like the XNOR gate, the XAND gate receives two inputs and produces a positive output if, and only if, both of the input values are the same. Indicated with either a 1 or a 0, true or false, the logic gate receives two boolean variables and will not produce a high output if the two variables are not equal. The function of a logic gate is plotted out on a table known as a "truth table." This is the truth table for an XAND gate: 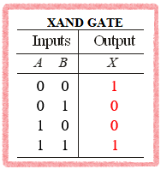