What is a Quantum Computation Theory?

Quantum Computation Theory is the implementation of quantum-mechanical phenomena in order to perform computation. The quantum computer can perform such a computation either physically or theoretically. Currently, quantum computation is divided into two main approaches: analog and digital. While the mechanisms comprising each approach vary, the foundations are similar in that they both use quantum bits, also known as qubits. Unlike traditional computers, which deal with binary values such as 1 and 0, quantum computers use qubits that can be in a 1 or 0 quantum state. Alternatively, however, they can also be in a superposition of the 1 and 0 states, essentially non-committed to either value. In practice, qubits are often measured as either a 1 or a 0. 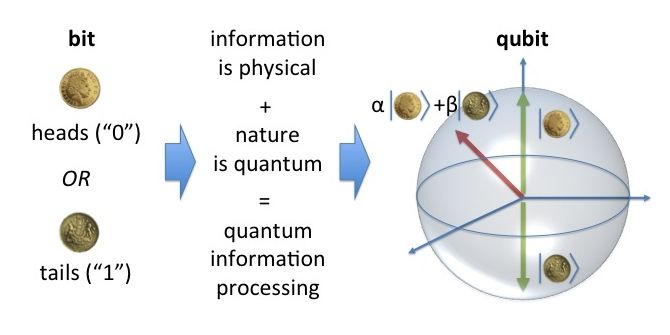 How does Quantum Computation Theory work?

states. Alternatively, a traditional computer can only be in one of the

states at any given time. The quantum computer operates by using quantum gates and measurement of qubit values. A quantum calculation often ends with a measurement in which the qubits are recorded at one of the

eigenstates, either a zero or a one. Sometimes, however, a computation will not end in a measurement. In this case, the computation produces an unobserved quantum state, which may be passed on to other computers as part of a network. It is important to note that quantum algorithms are usually probabilistic, meaning that they provide results with a known probability.

Primarily, there are three main properties in the quantum realm including superposition, entanglement, and interference. Firstly, superposition refers to the combination of two states that would traditionally be independent. A good way to conceptualize this is to imagine two musical notes at the same time, as their combination is a superposition of the two sounds. Entanglement refers to particles that behave together as a system in ways that cannot be explained with traditional logic. Lastly, interference describes the way quantum states can affect each other due to a phenomenon known as phase. If two waves are in phase with each other, for example, their amplitudes add, and alternatively, if they are out of phase, their amplitudes cancel.
A quantum computer will use an algorithm that takes advantage of these properties of quantum mechanics. Imagine a quantum computer is tasked with finding the best solution among many possible event outcomes. In this case, finding the minimum amount of energy between molecules as determined by bond length. The computer can be used to simulate a molecule by determining the lowest energy state among molecular bond lengths. Each length is recorded and repeated across various spacings until the computer develops the bond length with the lowest energy state. Often, quantum systems have to perform sequential operations for long periods of time. Specialized quantum computers are designed to process for longer periods of time, dubbed fault-tolerant quantum computers.
Fault-tolerant quantum computers are more robust in their ability to process for long durations due to their quantum capacity. This refers to the amount of qubits the computer has to process. More qubits equate to more states that can be manipulated and stored. Fault-tolerant systems have more qubits and a lower error rate, defined by a high quantum volume. As systems continue to increase their quantum volume, quantum computers will gain a computational advantage over its traditional counterparts.