What is Linear Independence?

An example should clarify the definition. Consider the two-dimensional Cartesian plane. We can define a certain point on the plane as (x, y). We could also write this as xî + yĵ, where î = (1, 0) and ĵ = (0, 1). î and ĵ are linearly independent. î and ĵ also happen to be orthonormal, but this isn't necessarily the case with all linearly independent sets of vectors; if we define k̂ = (2, 1), then {î, k̂} is a linearly independent set, even though î and k̂ aren't orthogonal and k̂ isn't normalized. We can still define any point on the plane in terms of î and k̂ -- for example, the point (3, 2) can be expressed as 2î - k̂. 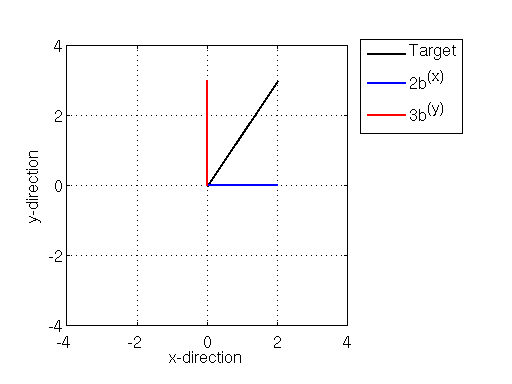 The bases b(x) and b(y) are linearly independent. There is no possible way to compose the basis vector b(x) as a linear combination of the other basis vector b(y), nor the other way around. When we look at this chart in 2D vector space, the blue and red lines are perpendicular to each other (orthogonal). However, linear independence can’t always be represented in 2D space. If we want to officially determine if two column vectors are linearly independent, we do so by calculating the column rank of a matrix A. We compose this by concatenating the two vectors: