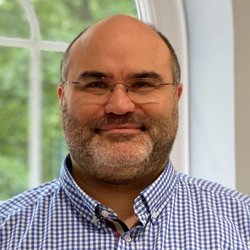 Alejandro (Alex) was born in La Plata, Argentina. In 1991 he moved to Barcelona, Spain, where he obtained his undergraduate degree in Telecommunications Engineering from the Technical University of Catalonia (Barcelona) in 1996. Then he carried out research on electrical impedance tomography for image reconstruction and noise characterization at the same institution under a CIRIT grant. In 1997 he obtained a grant from the Dutch Ministry of Economic Affairs to pursue his PhD in Medicine at the Image Sciences Institute of the University Medical Center Utrecht on model-based cardiovascular image analysis. During this period he was visiting researcher at the Imperial College in London, UK, and in Philips Medical Systems BV, The Netherlands.

Professor Frangi has edited several books, published 7 editorial articles and over 230 journal papers in key international journals of his research field and more than over 200 book chapters and international conference papers with an h-index 58 and over 22,800 citations according to Google Scholar. He has been three times Guest Editor of special issues of IEEE Trans Med Imaging, one on IEEE Trans Biomed Eng, and one of Medical Image Analysis journal. He was chair of the 3rd International Conference on Functional Imaging and Modelling of the Heart (FIMH05) held in Barcelona in June 2005, Publications Chair of the IEEE International Symposium in Biomedical Imaging (ISBI 2006), Programme Committee Member of various editions of the Intl Conf on Medical Image Computing and Computer Assisted Interventions (MICCAI) (Brisbane, AU, 2007; Beijing CN, 2010; Toronto CA 2011; Nice FR 2012; Nagoya JP 2013), International Liaison of ISBI 2009, Tutorials Co-Chair of MICCAI 2010, and Program Co-chair of MICCAI 2015. He was also General Chair for ISBI 2012 held in Barcelona. He is the General Chair of MICCAI 2018 to be held in Granada, Spain.

Professor Frangi is Chair of the Editorial Board of the MICCAI-Elsevier Book Series (2017-2020), and serves as Associate Editor of IEEE Trans on Medical Imaging, Medical Image Analysis, SIAM Journal Imaging Sciences, Computer Vision and Image Understanding journals. Professor Frangi was foreign member of the Review College of the Engineering and Physical Sciences Research Council (EPSRC, 2006-10) in UK, is a recipient of the IEEE Engineering in Medicine and Biology Early Career Award in 2006, the ICT Knowledge Transfer Prize (2008) and two Teaching Excellence Prizes (2008, 2010) by the Social Council of the Universitat Pompeu Fabra. He also was awarded the UPF Medal (2011) for his service as Dean of the Escuela Politècnica Superior. He was awarded the ICREA-Academia Prize by the Institució Catalana de Recerca i Estudis Avançats (ICREA) in 2008. Professor Frangi is an IEEE Fellow (2014), EAMBES Fellow (2015), SPIE Member, SIAM Member, MICCAI Member, and elected member to the Board of Directors of the Medical Image Computing and Computer Assisted Interventions (MICCAI) Society (2014-2018). Professor Frangi serves in the Scientific Advisory Board of the European Institute for Biomedical Imaging Research (EIBIR) and was Chair of the Fellows Committee of the IEEE EMBS (2017-2018).

Professor Frangi's main research interests lie at the crossroad of medical image analysis and modeling with emphasis on machine learning (phenomenological models) and computational physiology (mechanistic models). He has particular interest in statistical methods applied to population imaging and in silico clinical trials. His highly interdisciplinary work has been translated to the areas of cardiovascular, musculoskeletal and neuro sciences.

He been principal investigator or scientific coordinator of over 25 national and European projects, both funded by public and private bodies. During 1/2006-3/2010 he was coordinator of the @neurIST: Intergrated Biomedical Informatics for the Management of Cerebral Aneurysms, a 12.6M€ European Integrated Project, during 1/2006-12/2009 he was scientific co-PI for the Spanish CENIT Technology Platform CDTEAM funded with 15.7M€ by the Spanish Ministry of Science and Innovation through CDTI, in 2009-2012 he participated of the euHeart Integrated Project, in 2009-2012 in the Virtual Physiological Human Network of Excellence, and in 2009-2012 he was Scientific Coordinator of the CENIT Technology Platform cvREMOD funded with 13.6M€ by the Spanish Ministry of Science and Innovation through CDTI. He coordinates the € 13.3m-Integrated Project funded by the European Commission entitled VPH-DARE@IT DementiA Research Enabled by IT, led by CISTIB and involving other 19 European organizations. Finally, he has been recently awarded a £ 1.3m grant as Principal Investigator from the UK Engineering and Physical Sciences Research Council (EPSRC) for the project OCEAN: One-stop-shop Microstructure-sensitive Perfusion/Diffusion MRI: Application to Vascular Cognitive Impairment He is also one of the 5 co-investigators in the recently awarded EPSRC-NIHR HTC Partnership Award 'Plus': Medical Image Analysis Network (MedIAN) led by Oxford.

, an open-source platform for rapidly developing pre-commercial software prototypes in the areas of image computing and image-based computational physiology modelling, and

MULTI-X (Health Data Analytics and Modelling As a Service Platform), a cloud-based platform for computational phenomics, in silico medicine, and in silico clinical trials. The research and development conducted in his research group led to two spin-off companies Clintelis SA in 2009 and GalgoMedical SA (www.galgomedical.com) in 2013.